What about Merkel‘s last big project?

In July 2020, Germany is taking over the rotating EU Council Presidency (a.k.a. leading discussions between the EU Member States). This should have been Merkel’s last, really big project before she retires, and the to-do-list was ambitious:

It would have suited her: the always calm and foresighted leader departing after pointing in the right direction towards the solution of the EU’s biggest problems.

Enter the Coronavirus: Priorities have now shifted and the question of how to cope with the crisis overshadows everything else. However, Merkel herself has clarified that she still plans to tackle the other topics —especially climate change. This was mentioned by the Chancellor to still be a key priority for Germany and also for the future of Europe. The presidency still could become Merkel’s really last, and now even bigger project.

“Honey, this year we’re vacationing in our garden…”

The tourism industry in Europe, already suffering, will be hit even harder in summer. Not only are people insecure about going on a vacation, the inner European borders are still closed – and might remain closed for quite a while. German Federal Ministers Seehofer (Interior, CSU) and Maas (Foreign Affairs, SPD) don’t want to make any hasty decisions when it comes to opening borders – infection protection is still priority no. 1. Accordingly, the worldwide travel warning of the German Federal Foreign Office remains in place until the 14 June 2020. The tourism industry in Germany is preparing and expects models like domestic farm vacations to become extremely popular this year, while Spain (a.k.a. Europe’s number 1 holiday destination) is trying to figure out how to cope without the Germans and the Brits.

Not only US-Lobbyists with stakes in the EU find it hard to tell: Who is in charge in the EU?

Since the beginning, EU Member States have been struggling whether or not to create a Union, whether to become a Member or what to make of it. That has not changed.

In a Krautshell: The European Council is the Merkels and Macrons with a President Charles Michel, more of a spokesperson and fixer of the Member States internal dramas. Commission is the Government with President Ursula von der Leyen – those are the people that have the power to turn President Trump from a trade war general to a love bird of the US-EU trade relations after only one meeting. And the European Parliament continuously kicks dictators’ bums and protects citizens’ rights, e.g. with that general data protection regime that you are talking about now.

*If you struggle with this expression: It’s a bible quote (Romans 11:33) and supposed to say that no one has ANY clue, what the European Council is up to. Probably not even the Council.

For more on digital party congresses, digital riots and an update on the saving of German airline Lufthansa, check out the PDF:

Covid-19 caused the EU to give up on competition laws, restriction on subsidies, freedom of movement rights, open borders and some dozen other achievements for governing the EU’s internal market. The budget of the EU-Commission will now be boosted by hundreds of billions of Euros for the recovery and to “reunite” the member states. Boosting the EU-Commission’s governing competences in the first place might have been cheaper. Just like in the refugee crisis regarding the protection of the EU borders, the EU-crisis prevention management for such a pandemic is just as efficient as its Military: 28 pieces without a strategy and competences for the EU-Commission.

In short: Instead of being in a position to manage the crisis, the EU-Commission is rather highjacked by the Council, well depicted in this meme circulating in the Brussels bubble last week (left President of the Council Charles Michel, right Commission President Ursula von der Leyen). 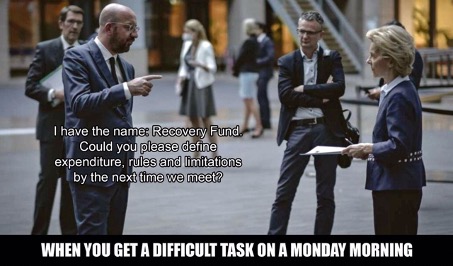 But Ursula – a former minister of Merkel, medical doctor, master of public health and former resident of Stanford, California, vaccinated herself against toxic power play and strikes back: On Friday, she initiated a scientific fight-back-Covid-19-fund-raising-plan to strengthen the WHO and other institutions of global significance. Today, an online conference will take place to hopefully raise 7.5 billion Euros. Charles Michel has already signed.

It was HER idea and Charles has already signed? Well, France’s Emmanuel Macron, Italy’s Guiseppe Conte and Germany’s Angela Merkel have already supported her publicly. Norway, Canada and many other countries have followed, and on Sunday even the Pope joined! That stunt to regain the driver’s seat by going global was definitely a masterclass for yedi-politicians that usually are strained by national dramas in the EU.