Today we’re coming at you with a new Krautshell-Format, this time with pretty pictures and even more insider insights. We hope you enjoy this week’s Krautshell edition, and have a great start into your weekend!

Ready To Go For A Traffic Light Coalition

Heads up, folks. The coalition negotiations between the SPD, the Greens and the FDP are starting in the coming days. The parties announced this on Friday after their (very speedy) exploratory talks. The coalition negotiations will last for some weeks, but we can already provide you with some insights into what the parties agreed to in their exploratory talks. Enjoy and ping us for more!

Reflecting on everything that was discussed would go far beyond our usual scope. So, for now, just a brief overview of the most important points (see also the WOOM by Christian for that). The parties want to:

To find out more about how transatlantic relations factored into the exploratory talks, check out Christian’s WOOM below.

Warsaw or Brussels: Who Reigns Superior?

What do fiat money and the European Union have in common? They both are only possible if people believe in them. And this past week, that belief was seriously called into question, reminding us of the fragility of the European project. Specifically, a Polish top court recently issued a ruling that undermines one of the cornerstones of the European Union’s existence: the primacy of EU law. In the ruling, labeled as a “nuclear strike” on the EU legal order, the Polish constitutional court declared that certain elements of the EU treaty clash with, and therefore should not prevail, over the national constitution. You may ask yourself, why does this matter? Well, this ruling opens the door for other Member States to also reject certain aspects of EU law in the future, should they feel like it doesn’t correspond to their national wishes. This could trigger a domino-effect, and if enough countries go down this path, the EU will ultimately lose its authority.

Reactions to the rulings were mixed. In Poland itself, tens of thousands of people took to the streets to express their support for the European Union. Meanwhile, Hungarian Prime Minister Viktor Orban, who has also been a thorn in the EU’s side over similar issues, welcomed the ruling. Both the German and French foreign ministers lamented Poland, reminding the country they signed a legal commitment to the cause. The EU is currently scrambling to come up with a response, but it still has one very powerful tool in its back pocket: withholding pandemic recovery funding. While this is not an ideal solution for Commission President Ursula von der Leyen, as it will slow the whole bloc’s economic recovery, she’s banking on the assumption that Poland will deeply feel the big hole in its pocket. We’ll keep you updated.

The Post-Merkel Blues in the CDU

As the Bolivian-American educator Jaime Escalante once said, “Life is not about how many times you fall down. It’s about how many times you get back up.” While the quote was originally used in the context of high school calculus, it probably will resonate with many CDU members following their historic defeat in the Bundestag elections. Party leader Armin Laschet has already signaled he would step down from party leadership. But, where does the CDU go from here?

For starters, there will be a massive shake-up of party leadership. And by that we mean the ENTIRE party leadership: CDU General Secretary Paul Ziemack explained that new elections will be held for party leader, general secretary, the entire presidium and the federal executive committee. You know, like that crazy haircut you got after your ex broke up with you. Younger CDU members are calling for a membership survey for their voices to be heard, but this would only serve as a recommendation rather than a binding result. Along these lines, more than 300 district chairmen are to meet at the end of October to decide on how to integrate the grassroots of the party better. We’re curious about what emerges, as the CDU has historically been hesitant to leave decisions like this up to “the masses.” Some names being thrown around as successors are Friedrich Merz and Norbert Röttgen, both of whom lost out on party leadership to Laschet earlier this year. At 65 and 56 years of age respectively though, these men are rather “same-old, same-old”, than “radical course change.” Another option is current Minister of Health Jens Spahn, who, at 41, is often considered the “future of the party” and a “modern conservative.” Unfortunately, Spahn also lost some popularity through the pandemic. Either way, we all eagerly await the new and (hopefully) improved CDU! Ping us if you want to find out more. 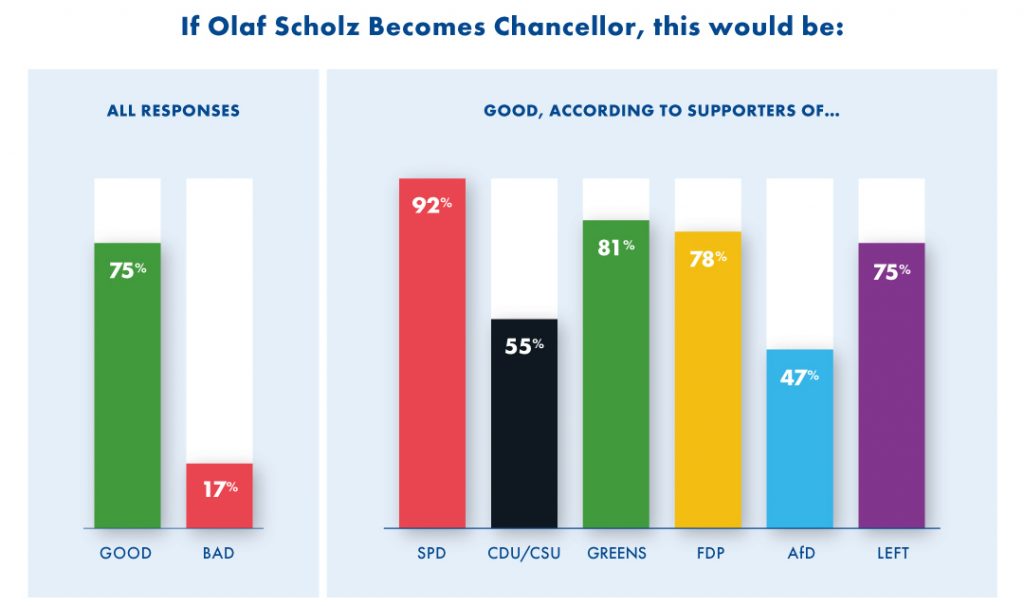 The Resurgence of the SPD

After years of full CDU/CSU power, this year we witnessed a true comeback. The SPD has risen from the dead (okay, forgive the drama) and aims to position Germany’s Chancellor for the next four years. As junior government partner for 12 of the past 16 years under Angela Merkel’s (CDU) Chancellorship, the SPD admittedly hasn’t completely been down and out. Still, their sinking polling numbers over the years didn’t really reflect their government involvement. So, what happened this year for the SPD to come in first in the elections and Olaf Scholz to become the most favored Chancellor-candidate?

The long and steady fall

The last SPD Chancellor was Gerhard Schröder. He was still an old school politician. Someone you would want to drink a beer with. See him for instance in a famous video where he was signing autographs and saying to someone: “Hey, get me a bottle of beer – otherwise I’m going on strike here!”

When Schröder was in office, Germany’s unemployment rate was at a historical high, so he had to implement rather harsh social policies – the so-called “Agenda 2010”. Economically, his agenda was a success. Politically, less so. By weakening social security systems, Schröder made himself unpopular with many SPD voters and members. This might be the point where it started going downhill, but let’s talk about the interesting stuff: how they stopped the free fall.

The Mastermind Or “One Man Sees Red”

Today, we want to introduce you to Raphael Brinkert who can undoubtedly be called the “mastermind” of the SPD’s resurgence. Who is he? Brinkert is a classical marketing and PR guy who usually does campaigns for famous football players or the German football association (DFB). He also managed the CDU campaign for the European Elections in 2019. Then, last year Brinkert decided to join the SPD, after which he was chosen to run the party’s election campaign. His key contribution: Brinkert was able to set the tone of the political debate. Just an example: two years ago, before Corona, the two top priority topics for German people in public polls were climate change and the economy. Both topics are not something people would associate the SPD with. Brinkert and his SPD counterpart, Lars Klingbeil (SPD General Secretary and, to be fair, the second mastermind behind the campaign) decided to spin the SPD messaging for this campaign to the party’s areas of strength: higher minimum wage, more public housing and respect for everyone regardless of their job, background, etc. The messages were on every poster, they talked about it in every debate on TV. And suddenly, two months before the election the most important political topic according to public opinion was… social justice. And the party with the highest competencies in that area is… of course, the SPD.

A second part of the winning strategy, as brought forward by our colleague Adrian who is also an SPD member, was the role of Lars Klingbeil. The SPD General Secretary made two key contributions that led to the SPD’s success. First, he placed Chancellor-candidate Scholz at the center of the campaign. This was a smart move, as Scholz turned out to be quite popular among Germans. Second, Klingbeil kept party factions united to portray iron-clad unity towards the outside. Klingbeil’s insights from party headquarters significantly aided Brinkert’s campaign efforts, no question about it. And that’s the house’s view.

We already checked the 12 pages of their declaration for buzzwords: Not a single “America”, no “Vereinigte Staaten” (transl. “United States”) but hey, we found the term “USA” 13 times… but only within words like “Zusammenarbeit” (transl. “Cooperation”), and if your query isn’t case-sensitive. Given our grand disaster, as a Christian-democrat I am not in a position to badmouth ANYONE who tries to devise a plan for Germany, but STILL: remember things we told you what could happen with the US-Germany ties if the Lefties behind Olaf Scholz enter the stage

Ok that is MY opinion (replace it with fact and it is still sort of true ?). At least, the lefty-liberal innovators mention the “transatlantic alliance” as a “central pillar” of the to-be-fostered “alliance of democracies”. Indeed, it might help the German government to claim they have indicated partial interest to maybe support the idea of a blurry construct that may or may not entail the un-mentionable United States of America when negotiating and coordinating action on topics like climate change, human rights, the digital economy, and defense.

Am I too mean?

I might be a bit frustrated, fine. Alcohol is not a solution (for frustrations, chemically though….), cannabis will be legalized soon but isn’t yet, so what else is left but the bit of sarcasm to politically gaslight away from “missing Merkel” (or Norbert Röttgen in this transatlantic case).

Then again, let’s wait for the real coalition treaty in about four to eight weeks, after all, also for Christian-democrats, it will soon be all about a positive and optimistic new era!