German Stimulus Plan – It has “Wumms”*

The stimulus plan agreed to this week after 21-hours of negotiations between the governing parties, CDU and SPD, in Berlin, amounts to a total of €130 billion and is the largest stimulus plan since the 2nd World War. A short overview of the most important points: €25 billion for further interim aid for companies, €20 billion for a reduction of the VAT, €4.3 billion for a one-time bonus of €300 per child for families, €6.7 billion for support of electronic mobility, €9 billion for promotion of the national hydrogen strategy and almost 60 other items on the list. German Finance Minister Olaf Scholz (SPD) described the stimulus plan as classical Keynesianism: the state saved money in good times, now it is using it to help citizens and companies in bad times. This and many of the measures show that the power of the junior partner of the governing coalition SPD shouldn’t be underestimated. All in all, the stimulus plan is liked by almost everyone, resulting in SPD and CDU/CSU publicly arguing who had the best ideas. Ping us for more details on the stimulus plan.

*German-English: phonetic byword for a crashing sound if something hits surprisingly hard

If you read the last Krautshell episode you might wonder: Where is the scrappage bonus for cars everyone was talking about? It seems that the most powerful German industry wasn’t successful in their lobby efforts after all. Many economists warned of a scrappage bonus and also the SPD party leadership was not a fan. Refusing the scrappage bonus was a highly applauded decision, not only by the Greens (a.k.a. biggest opposition party), but the general public. (On a side note: We as well applaud the sustainability aspect of this decision but still wonder: The German government just granted €9 billion to save Lufthansa in the crisis – a company worth around €4 billion on the stock market and not exactly environmentally friendly). It was an unexpected defeat for the omnipotent automobile lobby and a remarkable decision by the governing coalition. The dawn of a new era in lobbying one might think, where even with considerable economic power you still need good arguments to convince politicians of your position. #like

Another “Wumms”: Is the ECB Firing its Last Bullet?

This week, the European Central Bank (ECB) decided to expand its emergency purchase program for bonds with the stylish title PEPP by €600 billion. Why? States need money and there is not much room for action for the ECB besides buying bonds. Plus, the ECB has to guarantee their main target: price stability with a target inflation rate of close to 2% (currently: FAR away from that). Classic economic theory says: When prices are decreasing, citizens and companies tend to postpone consumption and investment decisions in the hopes of an even bigger decrease in the future, which ultimately affects the already bad economic situation. All in all, buying bonds now looks like a smart move.

Except that the German Constitutional Court recently ruled that the general purchase of government bonds by the ECB might be unconstitutional. And even when the scope of the ruling didn’t include PEPP but the less stylish regular program PSPP, due to that ruling, a political aftermath is probably inevitable.

For an update on GAIA-X, the postponed China summit and the EU Farm to Fork strategy, check out the PDF:

Half a trillion Euros.

As you just read, the German government yesterday decided on a stimulus plan for the economy of €130 billion. On top of the already agreed upon Corona support package of €353 billion and additional €820 billion in guarantees. And everyone is applauding.

I am not that excited. Keynes’ theory and the idea that the state should substitute for the lack of consumer demand always boils to the surface in times of crisis (or generally when Governments want to spend money). But what we did not discuss is the financing aspect of the package. Of course, that is nothing the current government will have to deal with.

What we did not do either is a thorough impact assessment of the measures. Take the three percent point reduction of the value added tax for example. There is no way for the state to force sellers to actually reduce prices. And history teaches, that they prefer to use this kind of reduction to increase their own profit; especially in times when their own economic situation is more than strained. Even if they did pass on the price reduction – social distance shopping is not really fun, even if consumers for some unknown reason decided to spend money while being on furlough and with unemployment dawning. 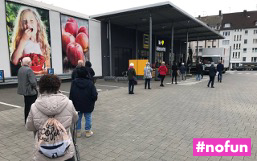 There are purposeful and necessary parts of the package I fully support. Incentives for new technologies, digitalization and sustainability were the driving principles. Unfortunately, at some point in the 21 hours negotiation marathon, the coalition partners got carried away and apparently just nodded to every suggestion made. Instead of pumping money into the economy, we should be focusing even more on incentivizing its reinvention, reducing operational burdens, rethinking supply chains. We should look at the crisis as a chance to fundamentally change the way we think and live. With all the hardship and constraints we are enduring, I am still with Milton Friedman:

“Only a crisis – actual or perceived – produces real change. When that crisis occurs, the actions that are taken depend on the ideas that are lying around. That, I believe, is our basic function: to develop alternatives to existing policies, to keep them alive and available until the politically impossible becomes the politically inevitable.”