It’s been almost three years since we first brought you the Krautshell, and today, we’re celebrating a monumentous occasion: our 100th Issue! We thank each and every one of you for embarking on this journey with us and enduring our very nerdy, questionably funny humor. In this Making-Fun-of-Ourselves-and-German-politics Krautshell Extravaganza you’ll find some Superlatives (it’s back to High School again…), our biggest wins and fails over the years, and a very, very serious spotlight on some facts & figures about German politics. We’ll be back next week with some solid political intel, but today – just sit back and enjoy. 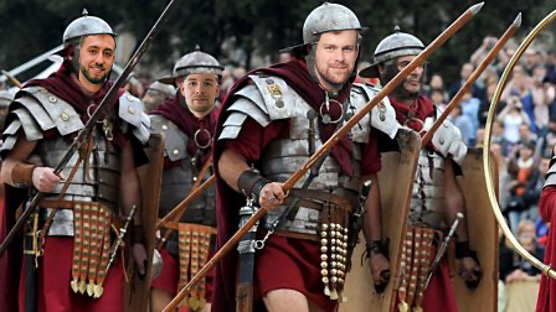 (in case you were wondering – these are the three main Krauts behind the Krautshell – from left to right Mats, Max, and Jonny)

As we’re looking back over our 100 Krautshell editions, we of course need to give out some awards to celebrate the occasion and recognize greatness where it’s due.

So, without further ado, let’s make like Michael Scott in the Office and engage in some self-aggrandizement.

Choosing topics for Krautshell articles is by no means an easy task. The world of German and European politics is a turbulent one, so every week we do our best to guess which topics would pique your interest the most.

As we’re already tooting our horn a bit, we have to say we’ve really managed to cover an entire encyclopedia’s worth of political topics, everything from Europe’s hottest political memes to updates on the rental situation in Berlin.

Disagree or have a topic you’d like to know more about? Ping us!

There’s an election? A massive bailout package gets approved? A European government dishes out a massive fine? We’ve got you covered with all the major political happenings on this side of the Atlantic.

However, we also like to spotlight some not-so-mainstream aspects of German and European politics – because that’s often where the really whacky stuff happens. Here are the three most bizarre things we’ve covered in our 100 Krautshell editions:

Most Cringeworthy (A Discography)

We live for puns. We love playing with words. We think we’re funny sometimes, but when we did a review of past Krautshell editions, we also cringed a bit at some of the titles we created. So, we decided to make fun of ourselves a bit more. We give you the Krautshell pop album of the century: 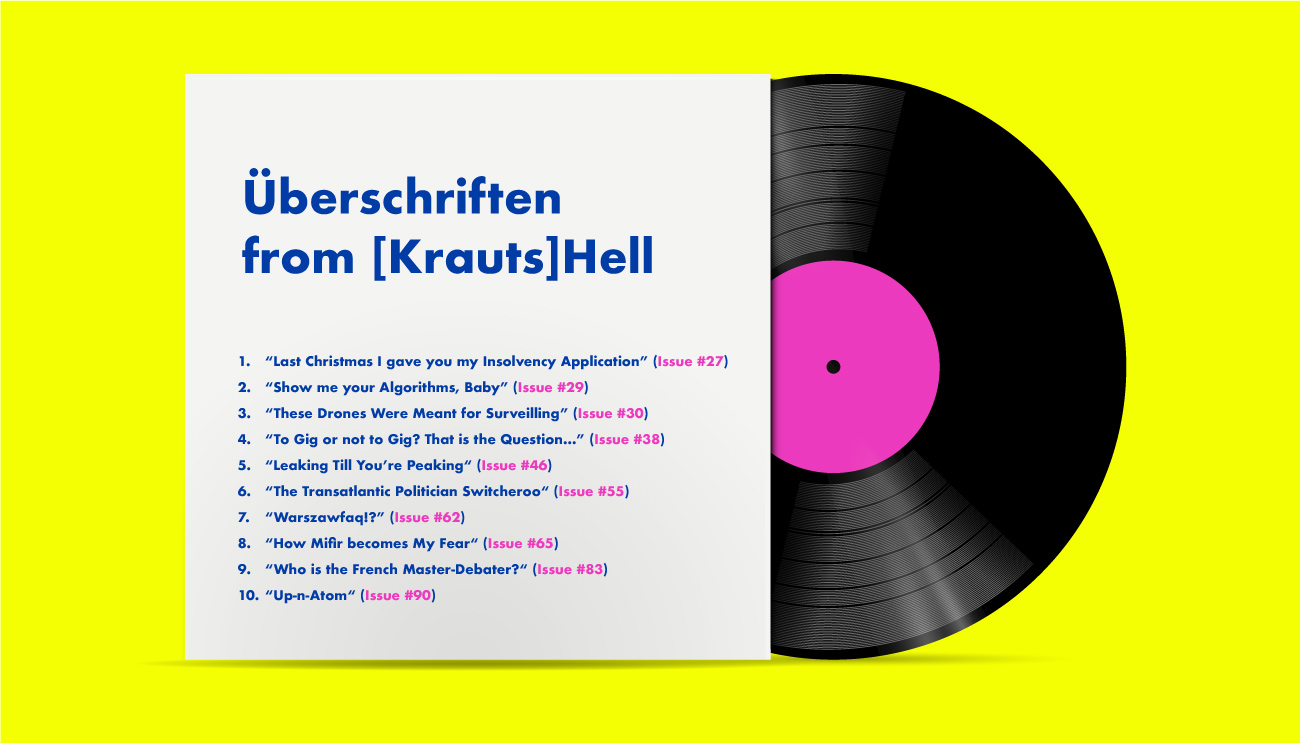 You might or might not have noticed that we work with hyperlinks a fair amount (and if you haven’t this might be a great time to CLICK on one). Apart from bringing you the news you need to know, we also want to spark your interest for new topics or, where possible, start your weekend with a little chuckle. Hence, the hyperlinks.

We’ve dusted the cobwebs off the old Krautshell editions to find out which link was, statistically speaking, your favorite. And, some of you are surely social butterflies as the winner is…

From the Krautshell Summer Interview Special on the War in Ukraine: 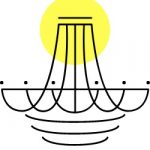 Aaaannddd… since we’re already on the topic of click bait – we would like to use this chance to do a little shameless self-promotion, as Newsletter-Writing is not the only thing we do.

Recently, we opened up a prime event location right in the heart of the European Quarter in Brussels – the Premier Salon.

So, basically what we’re saying is: don’t hesitate to reach out if you’re looking for an event space, and trust us when we say we put the same amount of passion into event-management as we do into every weekly edition of the Krautshell.

Ping us for event requests, viewings, or overall questions!

As you probably know, at least from time to time we’re bold enough to make some predictions. We call the odds of some future events – a dangerous game in politics. Sometimes you are very informed lucky and get it right, sometimes you are just very unlucky stupid and must turn out wrong. We thought about an honest reflection for the 100th issue of the Krautshell and want to give you a (very subjective) overview of where we totally nailed it and where we totally failed.

Can’t we keep up with the simplest prediction of all?

Maybe you remember our first issue: we promised bold spins no newsletter-journalist would dare to give you – and we think we hold up to that promise. However, being the fools we were we also predicted to publish every Monday morning and changed that to Saturday already with issue #5 because… well, you know, Mondays?! Am I right? Also, we predicted that we would probably miss an issue from time to time because of too many drinks. Despite the regular summer and winter breaks we didn’t miss a single one. Forgive us, we need to think about drinking more beer, wine and champagne (not necessarily all together).

We know what we’re doing

In issue #4, we reported about the debate of whether the state should be invested in German prime airline Lufthansa. After all, the German government decided to buy shares and we hypothesized that state investments are hardly profitable. VERY WRONG. The government started to reduce their share a few weeks ago to now under 10% – and sold the stocks at a price that was two times higher than the buy-in. It’s good we earn our money in politics and not with financial advice. You’d be broke by now.

OKAY, it’s time for our BIG wins around the federal elections 2021. Issue #50: we predicted the resurgence of the FDP and their possibility to join a government consisting of FDP, Greens and SPD – admittedly, we assumed the Greens would lead this government and not the SPD, but still: IT HAPPENED. 50 points for Gryffindor.

However, the biggest win (in the very subjective view of the author of these lines here who accidentally also made that prediction) is certainly from issue #49. In May 2020, when the SPD polled at around 14-16%, Jonny predicted that Olaf Scholz as Chancellor-candidate would bring it home for the SPD. If you’d trusted in Jonny and placed a bet, you’d be rich by now (and if Jonny had trusted in Jonny, he would be, too).

One week ahead of the elections, we hypothesized that Christian Lindner would lead his FDP into a traffic light coalition should he become Minister of Finance in that construction… You know what happened.

Roughly a week after the federal election, we took our shot and presented you the crystal ball. We had for predictions (way before most exploratory talks and LONG before coalition negotiations):

Even though we presented it quite positive, let’s say we have a fifty-fifty outcome rate in predictions. Better not trust us with your bets but certainly with our advice.

German politics (and politicians) may seem boring most of the time, but we Krautshellers pride ourselves on making do with what we have. And you’d be surprised: There’s plenty of (mostly unintentional) humor out there.

Here are a few “best practice” examples we’ve collected over the years:

With much of the world’s view of Germany somehow connected to beer, it comes as no surprise that public beer consumption is something of a rite of passage for German politicians. (Think throwing a pitch at a Baseball game, but less movement.) So, without further ado, we proudly present some ranked snapshots of our last three national leaders earning their spurs in the Bierzelt (=beer tent). 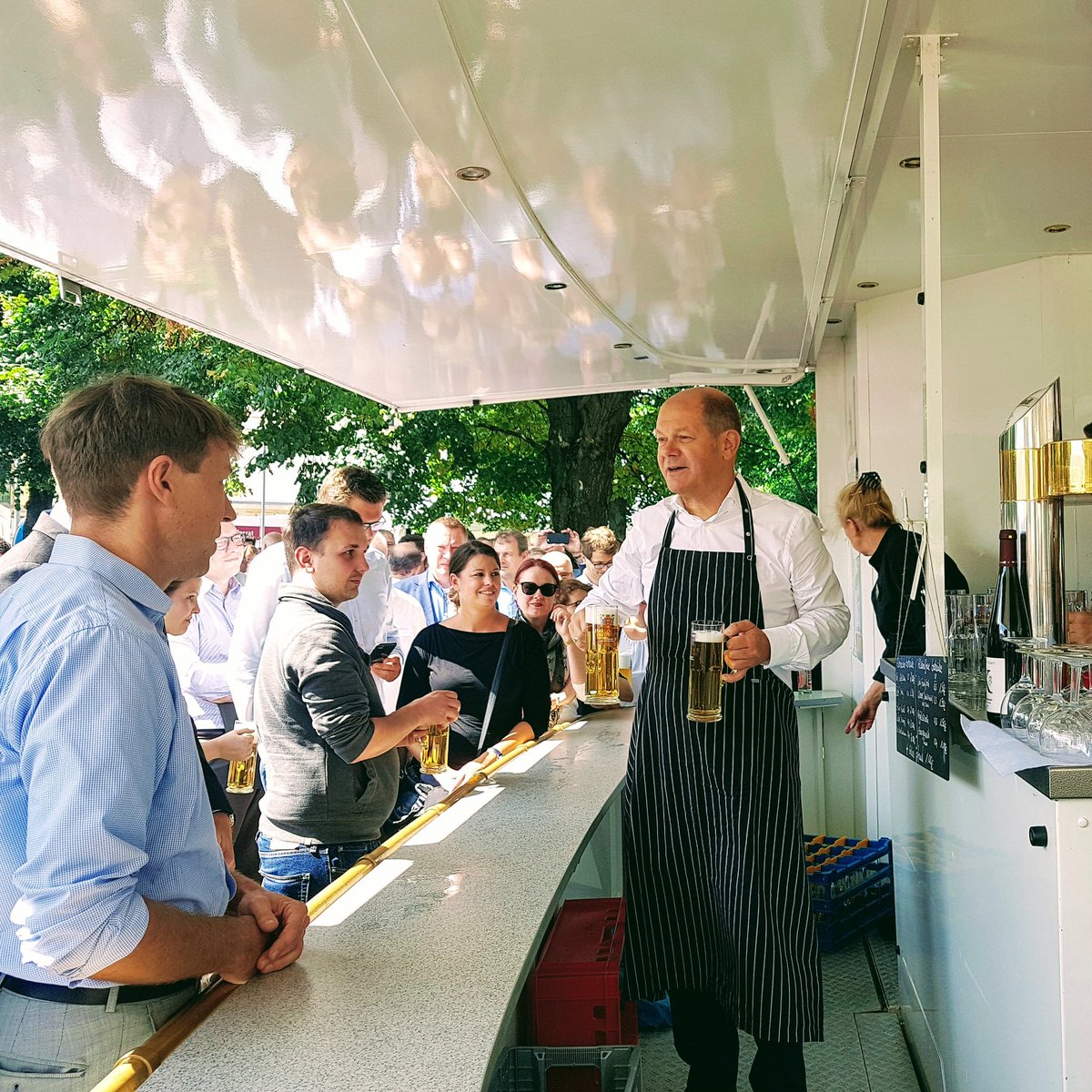 Extra points for the precautionary apron and the appropriate “civil servant” attitude, deductions for not actually drinking any of the beer himself. 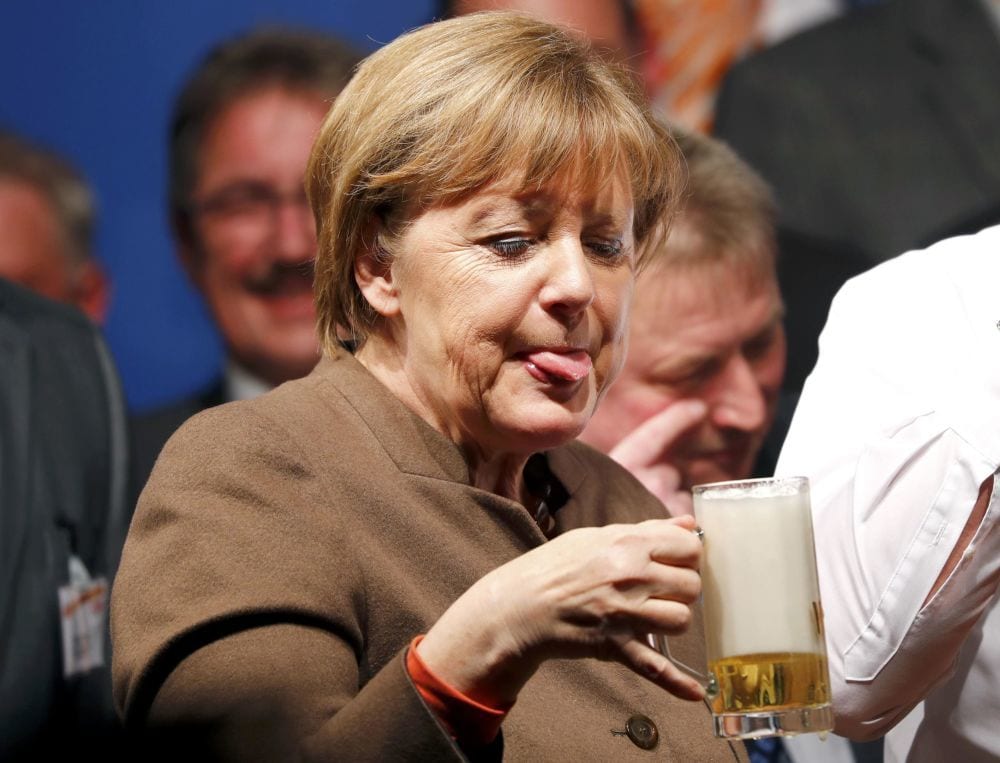 Since the glass consists mostly of foam, it’s not clear that the chancellor is drinking much of anything. At any rate, Merkel is struggling with what appears to be a bitter Pilsener.

Former SPD Chancellor Gerhard Schröder (in office 1998-2005) shows how it’s done. Too bad this close friend of Vladimir Putin is unlikely to be invited to any German beer festivals anytime soon.

The thing about people saying that German words are endless is that it’s technically true. Legal scholars have taken this exercise to the next level: Here are three laws that are incomprehensible to Germans and foreigners alike.

The approximate English translation would be “property traffic permit jurisdiction transfer ordinance” – if you have any idea what this could mean, we’d love to know.

This „beef labeling monitoring task transfer act” dropped off the books in 2013, to the great relief of law students across the country.

At a measly 60 characters, we weren’t sure this one would make the cut. But if you ever move to Germany and experience flooding, this “road drainage investment cost debt service levy” is the one for you.

As you will have noticed by now, Germany is well-known for its highly developed and occasionally incomprehensible legal canon. Add to this a national propensity for thorough regulation, and here are some rules you should keep in mind on your next visit:

Watch out, as this will land you a hefty five-year sentence in jail.

2.Don’t march in lockstep over bridges 🪖

Few countries have as much historical marching experience as Germany, so it should come as no surprise that some bureaucrat along the way figured out that bridges can collapse from excessive synchronic vibrations. Very thoughtful.

It is possible to swim in sewers, of course, provided one applies for a special permit from the local (sewage management?) office first.

Vorst English? We got you covered.

Full disclaimer: Everyone makes mistakes from time to time, and far be it from us to criticize German politicians for their English. But since the German public has a healthy schadenfreude for this sort of thing, here’s our top three:

A long-time favorite of the Youtube community, Müller’s speech during “Earth Day” has since been turned into a popular Reggae remix.

During a “Bits & Pretzels” conference featuring Barrack Obama as a visitor, Aiwanger bravely fought his way through his speech notes and invented a new language – Niederenglisch (named after his rural home region of Niederbayern).

Westerwelle won his Denglish spurs during his first press interview as foreign minister, when he got into an argument with a British journalist about what language questions he preferred. Westerwelle was quickly dubbed Westerwave (Welle=wave) in recognition of his English skills.

This list would not be complete without some photographs of prominent German politicians exhibiting various stages of professional behavior. Here’s our who’s who: 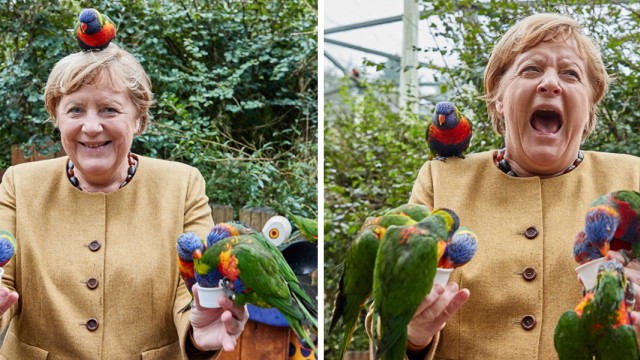 This picture of Angela Merkel could serve as an illustration of the range of emotions associated with her chancellorship. Both the bird and her finger recovered. 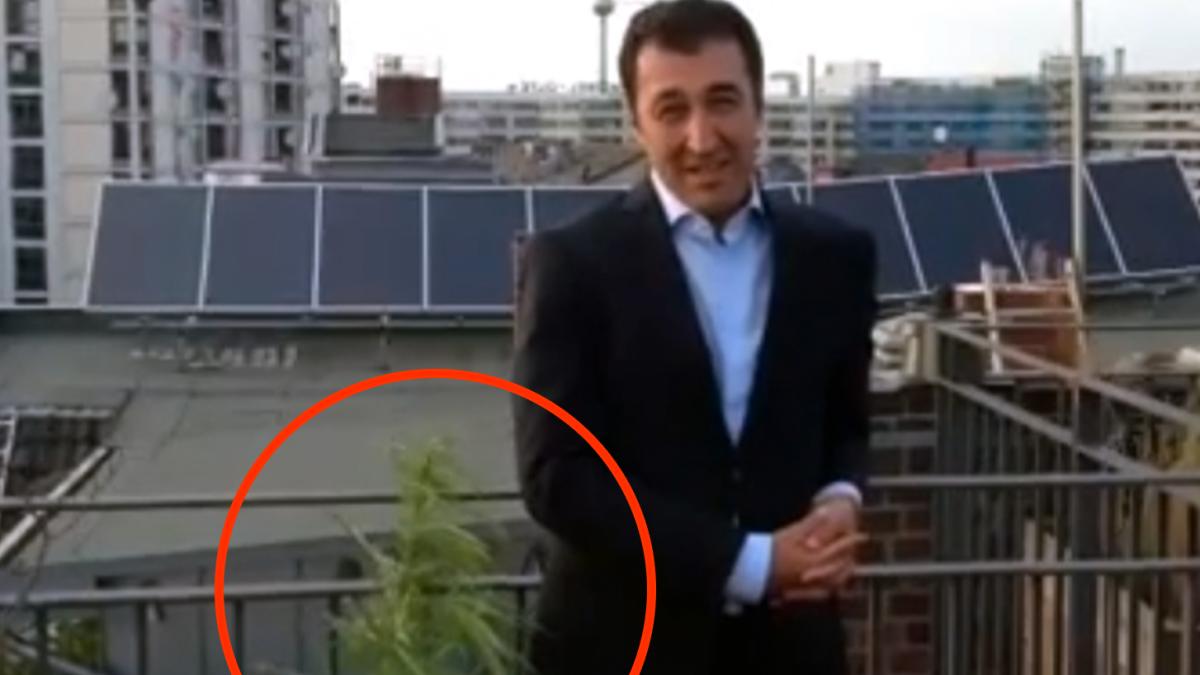 In one of the funnier twists in recent German politics, this man is currently Federal Minister for Agriculture. Here he is posing for Youtube in 2014 – German police ended up dropping the case. 🌿 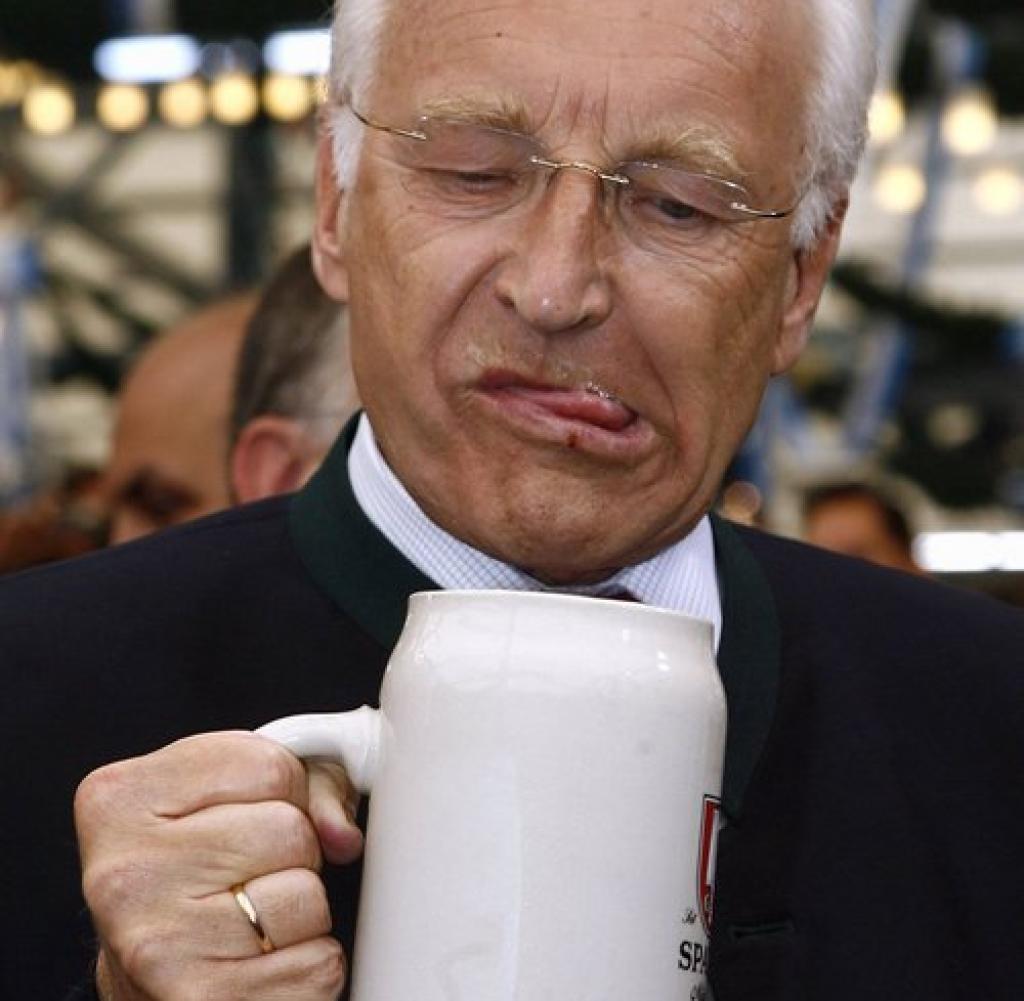 We spoke earlier about beer being a political rite of passage in Germany. This goes especially for politicians in the state of Bavaria, beer’s German ancestral home. Here is former State Premier Edmund Stoiber enjoying an obligatory Mass (a one-liter jug of beer).

While predicting is all fun and games and we will certainly continue to make bold statements and admit when we are totally wrong, we hope that the basis for all this fun – the analyses, the solid intel, the facts and figures – were, are and remain insightful for you.

Thank you all for reading!